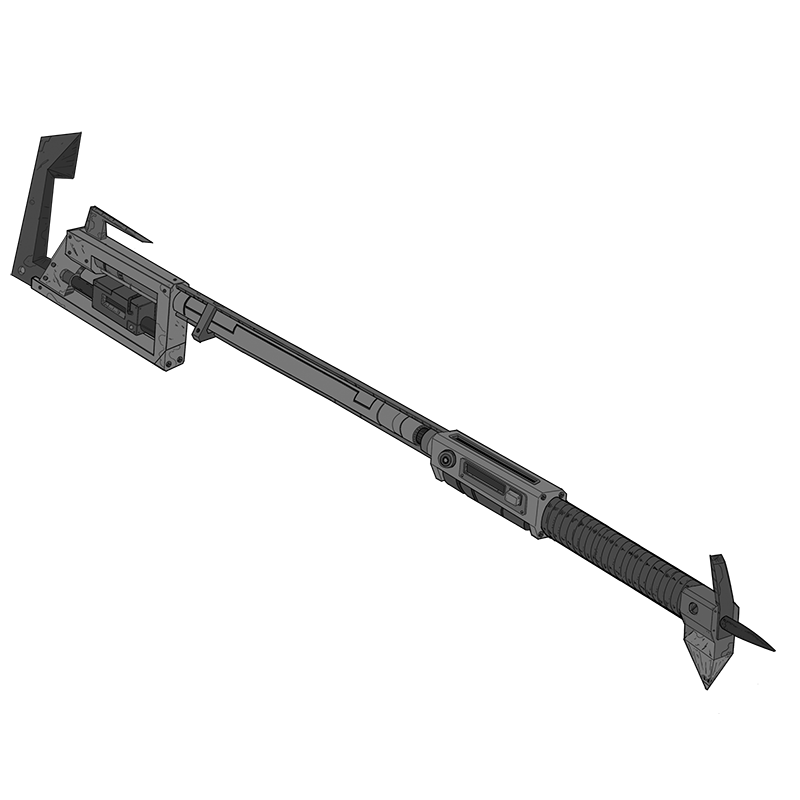 Seems the Fringeling ilk possess a pervasive climmer to ensure that anything that can be a weapon will be used as such. Tis a humble surveyor's pick, intended elucidate spackle and veins by splitting rock of all kinds, though most oft in the roid fields. Just one look at the jagged edges, apex hammer, terminal spike, and it's not difficult to conjure images of rustler spats gone wrong. A quick thrust and steel slides through ankle bone. A frictionless sweep to a shattered visor. Even in the realms outside close combat, I've known these fine-edged hooks to find employ in the kit of big game trappers, capable of gutting bhalu and creeper alike. But it's the high-tension clamping feature that propagated it's namesake use-case. The Hull Breacher. While the evolutionary path of miner to rustler to pirate is well trod, reaching back to the days when Queen Chanko reigned, Man Earlie's little war did much to expedite the process. And when you apply pressure to the throttle of natural evolution, things are bound to get crunchy. While I hold little in the way of respect for those who elect the pirate class, those Rovers - borne of Freight Wars fallout - sure knew how to float. Their tactical blend of agile skiffs, thruster bikes, and rustling-nurtured EVA prowess reached levels unparalleled in my line of sight. And if there's one discipline they mastered - nay, pioneered - it's planting a hook in a hull. Clamped like leeches. Sliced like paper. Spilling contents, be they wares, ores, or in the tragic case of Feigngull...passengers.